The Place of a Rich Saxon Burial in Leicester Museums

Editor : This article was commissioned by HAD and written by Laura Hadland, who curates the display of Glen Parva Lady at Leicester.  Her view is interesting, in particular because of the mixed views HAD has received about the display, including negative feelings about the way in which her remains are presented and strong feelings about her place in the local community.  HAD will be involved in any consultation with regard to changes in the display.

In 1866, at Rye Hill Close, about a mile northwest of Glen Parva, to the south of Leicester, workmen were digging for gravel. About two feet below the ground ‘they came to some stones forming a rude arch, which, on being broken into, exposed a skeleton in perfect preservation, lying north and south’. These were the remains of a Saxon woman, who died around 500-550 CE, and who was buried with her rich grave goods. The ‘Glen Parva Lady’, as she is known, now sits on display in the Jewry Wall Museum, Leicester’s archaeological museum.

The Glen Parva lady is hugely significant to the displays of the Jewry Wall Museum because she is a gateway to our understanding of Saxon period Leicestershire. Her remains introduce the Anglo Saxon section because they are an important example of Anglo Saxon colonisation in the Leicester area, which was to develop through the sixth century. Many of her grave goods can be dated to the early part of the sixth century, particularly her brooches.

Her grave goods are many and varied. They include the following:

This selection of objects, in addition to the remains of the woman herself, provide vast amounts of information and potential for education in a number of areas, including Glen Parva lady’s life and context as well as her death.

The Glen Parva lady, due to her early date and evident high status and despite her distance from any known church sites and lack of ecclesiastical objects, is most likely to be a pagan burial. She is interesting to modern visitors not only as being a representative of pre-Christian religion in the UK but also as her sophisticated belongings demonstrate that the early Saxon period was not really the technological or cultural ‘Dark Age’ that many people assume. Without her and the material associated with her being on display in the museum, it would be hard to break people’s stereotypes about so-called Dark Age Britain. In this, she does us a great service. 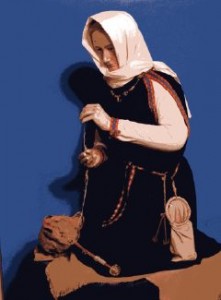 Currently, the Glen Parva lady is on display in the Jewry Wall Museum laid out in a full-length case, with her grave goods arranged around her as they were found. Accompanying her display are a number of interpretive materials. These include:

We have generally found this to be a very successful exhibit. There have been a number of occasions in the last two years I have spent working at the museum where people from Leicester accredit the root of their interest or even career in the historical field to a childhood visit to see the lady. I believe that there are solid reasons why the display of these human remains can have such a profound impact upon our visitors.

Museums are one of the few places where modern society can still have tangible contact with death. There are few other opportunities for members of the public, young or old, to come so close to the reality of death and such clear evidence of the passage of time. Furthermore, I believe that in coming face-to-face with the humanity of past ancestors, our visitors are able to understand the reality of the past much better. The experience of seeing human remains on display allows the public to connect the otherwise disassociated objects that they see in our museums with real people, facing similar concerns as themselves – providing for a family, observing religious beliefs, passing leisure time and so forth.

It appears that our visitors agree that experiencing human remains in the museum is a valuable and memorable part of their visit. Recent comments in our visitors book provide evidence for this.

Although of course, not everyone reacts as positively to the Glen Parva lady, or some of our older display panels which are in need of updating!

13/02/07 – ‘The Saxon lady still scares me, even after about 10 years or so of not seeing her. Need to update some text, noticed grammatical and spelling errors. Thank you. I still love it though.’

Our visitors generally seem to agree that the Glen Parva lady is central to their experience of Jewry Wall Museum. Out of 460 visitor questionnaires completed between April and July 2007, 90 visitors cited human remains as the favourite part of their visit when given an open text box to respond. That means that roughly 20% of visitors feel that their experience with human remains is the most important part of their visit. This is not an insignificant part of our audience. Of these, over a third mentioned the Glen Parva Lady specifically as their favourite part.

Leicester Arts and Museums has recently undertaken an introductory session of community consultation to find out people’s opinions of the Jewry Wall Museum and how they think it could be improved. I specifically included the display of human remains in this, as I am very interested into how people react to the displays and what they would want to see.

We asked 15 people, representing a range of local organisations, what they felt about human remains being displayed. Twelve felt comfortable, two felt slightly concerned and one did not like it.  All agreed that they should be displayed with respect and for a specific purpose. There should be a clear reason to justify their display. This consultation reflects our perceptions of our general visitors’ views. It was this issue of respectful display that I found to be the most prominent. Our communities were happy for human remains to be on display, so long as they were well interpreted to tell their stories and to give meaning to the rest of the objects on show and providing that the innate humanity of the remains was observed.

I have to admit I couldn’t have been happier with this outcome. I understand that there is not unanimity of opinion on the display of human remains, but I do not think that I will ever be able to completely satisfy all the needs of the visiting public. I do like to hear that the communities we asked are mindful that the museum only creates displays that have meaning, which tell a story, inspire or educate and engender respect. It means that many of my visitors are acting as ‘curatorial barometers’ and will be more than happy to tell me if I fail to meet these aims to their satisfaction.

I feel that being able to justify my reasons for keeping the Glen Parva lady on display is exceptionally important. I am not an advocate of keeping human remains in museums, on display or in store, when there is no tangible reason or benefit for it. I think that Glen Parva lady has proved her worth to Leicester’s population time and time again over the years and I am unable to think of a significant reason to change this situation.

Therefore, I currently find myself in the position where I wish to review her display and to make sure that she is displayed with the utmost respect for her humanity, but also for the maximum benefit to the visiting public.

I feel that the high level of reconstructive interpretation, which currently sits with the human remains, is of great use to the visitor. I believe that should I get the opportunity to redisplay this area, these techniques should be retained and expanded on. The model of Glen Parva lady in life is now looking rather old, as it has been on display in the museum for 40 years. It is time to develop a new model and perhaps site this in association with computer technology that allows even more insight into the Glen Parva lady and the information she gives us about her life and her death.

Glen Parva lady should remain in her position as the gateway between Roman and Anglo Saxon Leicester, due to her early date. She is a key part of the museum and opens up many interesting debates about human remains and archaeological evidence from the sixth century. There is potential to use recent information from excavations in the city to reconstruct more of Anglo-Saxon Leicester and to give our visitors a clear understanding of what evidence exists and how we have interpreted it, allowing them to make their own decisions about whether or not they agree with our view of Leicester in the past.

The final issue that looms large for me is to redisplay in such a way so as to preserve the Glen Parva lady’s unique humanity and to ensure that our visitors look upon her with respect as well as interest, and not as an object of curiosity or morbid showpiece. This is where I will need to consult more widely and in-depth with the communities of Leicester, to ensure that I work appropriately at all times. There are many factors to balance when displaying human remains and I will do my utmost to ensure that I find a way to draw out the themes of historical interpretation, life and death and respect and understanding in the most fitting way possible for the majority visitor opinion.

As HAD is considering sufficient respect in terms of display of human  remains in public places, such as museums, we are also aware of the issue of image publication on our website.  This article therefore has a photograph of Glen Parva Lady’s display reconstruction, rather than her remains.  We are interested in your feedback on the issue.