Representatives of HAD (Emma Restall Orr, Piotr Bienkowski, Mike Fletcher) met with representatives of Suffolk County Council Archaeological Service (SCCAS) recently to discuss the Saxon cemeteries at RAF Lakenheath and Mildenhall.  The meeting was arranged as a fact-finding meeting and as the first step in establishing communications with SCCAS.   We are delighted to report that the meeting was a success with both these objectives being met.

From SCCAS, Keith Wade (SCC Archaeological Service Manager) and Jo Caruth (SCCAS Senior Project Officer) provided us with the archaeological background and a general update on the current situation.

In summary, it was confirmed that analysis work has yet to be funded and so:

It was agreed that SCCAS and HAD would keep in touch, with SCCAS providing updates so that HAD can keep the Pagan community abreast of developments.  One of the first actions is likely to be further information sharing by means of a talk by Jo to be given to a gathering of local interested Pagans and involving HAD.

Jo Caruth explained that SCCAS routinely excavates human remains from all over the county.  However, it does not usually expect to find large Saxon cemeteries.  The scale of the finds from the RAF Lakenheath sites presents something of a challenge and because of this will take some time to process.

The story of archaeology at Lakenheath started in the late 1950s.  The first excavations, undertaken during the Lakenheath hospital building work in 1958/59, uncovered 33 Saxon burials.  These remains were poorly catalogued at the time and some are believed lost.  Then in 1980 six more sets of remains were found close by.  But it was between 1997 and 2002 that the majority of the human remains were excavated.  Less than 100 yards from the 1950s site, a total of three cemeteries were discovered.  Including those from the 1950s dig, a total of 446 sets of remains have been found – including 17 cremations.

One of the finds that attracted international attention was that of a ‘warrior’.  He was discovered at RAF Lakenheath in 1997 along with his sword, shield, spear and his horse – complete with gilded bronze bridle fittings.

RAF Mildenhall has not produced finds of a similar scale.  Most of the remains at Mildenhall are pre-Iron Age and number around six to ten.  None are Saxon.

The formal excavation at Lakenheath finished in 2002.  Since then, although other finds continue to occur whenever development work is undertaken, no analysis of the major body of material has been carried out.  SCCAS is currently applying for funding to carry out this analysis.  Even when funding is approved the work may be conservatively estimated to take at least 5 years.  Over 4,000 metal objects have been found at Lakenheath alone.  So, unless work on the analysis of human remains is given priority over the other artefacts, it is unlikely that there will be much movement for some time to come.

The story of human habitation at Lakenheath is one that the archaeologists are keen to develop further.  It is known that a rural Roman settlement occupied the site.  In part this is known because of the 30 or so burials that have been found there.  It appears customary for these rural Roman settlers to be buried in the corners of their enclosures.  The evidence suggests Roman occupation right up to the 5th Century BCE and the collapse of the Roman Empire.  Less than 50 years later, Saxons appear.  Little is known about how or if the two populations linked up or coexisted in any way.  It is because of this that SCCAS want to retain bones and teeth so that chemical analysis can be carried out in order to profile the community composition and understand the places these people would have travelled through in their lifetimes – helping to piece together some more of the story of this time.

Conclusions and Next Steps

A free flowing discussion took place over a meeting of more than two hours, during which some common ground was discovered.  Everyone agreed that the remains, whatever happens to them, should stay “within the Kingdom” – in other words, within their own lands.  This is something that HAD believes to be essential.

No decisions have been made about where the human remains will go after analysis; because human remains cannot be owned, there is less clarity as to who has authority or custody over these.  The MoD does own the artefacts found on their land.  At this stage, most importantly, both SCCAS and HAD agreed that consultation with the local community (including local Pagans) would be both essential and mutually beneficial.

With the aim of starting to gather local opinion, HAD has created a survey questionnaire to gather Pagan and non-Pagan views on the Lakenheath situation.  Results (below) show a striking pattern.  Regardless of Pagan tradition, regardless of whether Pagan or not, there seems to be a deep-seated shared regard for the decent treatment of our ancestors.  The questionnaire was posted at the West Stow Anglo Saxon Village.  (The artefacts found in the 1950s are on display at West Stow Anglo Saxon Village, which is well worth a visit.)

HAD will be taking steps in the coming weeks to encourage a focus group within the Pagan community of Suffolk and East Anglia – especially involving Saxon / Heathen folk – with whom SCCAS can interact and provide further updates to.  This is likely to be the start of a long process.

On 21st October a group of local Pagans met with Jo Caruth of SCCAS to hear about the archaeological work at Mildenhall and Lakenheath, and to visit the sites of the most significant Saxon cemeteries.  A two-hour talk by Jo Caruth provided a wealth of insight into the chronology of the excavation, the locations, the artefacts found, the burials and the people themselves.  One of the many insights shared included the observation that the many graves were not inter-cut i.e. the Saxons must have been using some form of markers for the graves to know where they were and prevent one cutting across another.  Considering that this site was in active use over two centuries, this shows a high degree of care and organisation.

A most striking aerial photograph was taken of the main cemetery that shows the extent and the orientation of the graves, and clearly demonstrates how well organised the cemetery was over a long period of time. 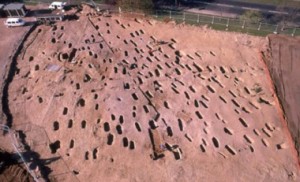 The group concluded the day with a guided tour of the location of the cemeteries within Lakenheath, and a smaller site at Mildenhall.  It was interesting to have the locations of adjacent settlements pointed out to us – quite close to the cemeteries themselves.  It is worth noting that Bronze Age and Roman people populated this location too.  Although the sites have now been developed we could feel the special nature of the landscape and have some sense of why our ancestors went there.

The day was judged to have been informative and of value to all concerned.  A local Pagan action group has been formed and foundations have been laid for long-term positive dialogue with SCCAS – who will be giving a talk at a local moot some time in the future once a mutually suitable date has been found.

More news will be posted here as things develop.

On Saturday 10 May, Jo Caruth from SCCAS gave a talk on the excavations at RAF Laken heath to a group at the local Pagan Mega Moot, Mildenhall.  The talk was well received by an interested audience who asked some keen questions at the end.

This was quite a ground breaking event in that it was the first time that local archaeologists had presented at a Pagan gathering.  It demonstrates the posibilities for dialogue and we hope that this will be followed up by other similar contacts and positive developments on this project and beyond. 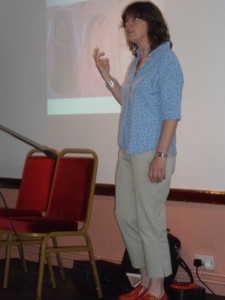 March 2009 – SCCAS have now announced that they have received the contract to carry out the post-excavation analysis on the human remains and artefacts from Lakenheath.  The initial updates are expected to be complete by the end of 2009.  However, this is a five to six year programme and the final report is some way off.

It will only be when this analysis is well under way or complete that HAD will be able to discuss the future of the human remains in any meaningful way.  Still, this is progress.

We also have news that 8 further burials have been recently unearthed at the site.

Ongoing analysis of all the finds from Lakenheath is now reported to be taking longer than expected with the first report not now expected until 2011.  This is truly a long term project.

Finally we have received some information on the findings of the analysis of those exhumed. The following snippet was received from Jo Caruth:

“We have been contacted by someone who is ken to DNA sequence 20 of the skeletons with a view to looking at Scandinavian immigration in the 5th century. One of our very early females appears to have come from southern Denmark.

We have also been made aware of a research project looking at incidences of the Black Death in the 6th century and that it can be identified in the bones. We have found a dramatic population decrease in the latter 6th century so this may be an explanation for that.

I think you knew that we had 3 men buried with lyres  – one of whom appears to have been related to the man buried with the horse.  One of these has a shirt made of a type of cloth that was probably imported, but otherwise the isotope analysis shows that all three appear to have born locally – so probably not travelling minstrels but permanent members of the community.

There are of course all sorts of smaller snippets of information such as the only ‘archer’ burial was also probably related to the man in the horse burial, and interestingly he was also the shortest male across all three sites; there does seem to be an elite burial area to the south-east of the horse and warrior.”

Further reports may be found through the following links.