The Boy in the Well

A consideration of human remains on display

The city of Chester is without a doubt one of Britain’s foremost tourist destinations, boasting a large number of attractions in the city itself and also in the outlying areas. During the summer months voices from Japan, France, the United States and innumerable other countries can be heard throughout it’s streets. Many of these can be seen in the company of tour guides dressed as legionaries in their familiar red tunics, shining armour and huge red shields emblazoned with Jupiter’s thunderbolts.

Chester has a rich history which can boast amongst things one of Britain’s foremost silver centres during the 18th century, a civil war siege, the base of Edward I for the invasion of Wales, Strongbow’s base for the invasion of Ireland and being attacked by Vikings. But the most famous aspect of Chester’s rich history, and the major reason for the horde of tourists (as opposed to hordes of those Vikings) is undoubtedly the predecessors of those modern day legionaries.

Chester as a city has it’s roots in AD60/61, the period of the sacking of Ynys Mon (modern day Anglesey) and the Boudiccan uprising. It’s first recognisable status comes as a marching camp for the forces of Suetonius Paulinus on his way to annihilate the Druidic centre of Mona. It was founded as a fort in AD79 and named ‘Deva Victrix’, or more simply just ‘Deva’, after the goddess of the river Dee that flows through the city. ‘Victrix’ is thought by some to refer to ‘Legio XX – Valeria Victrix’, the valiant and victorius twentieth legion who accompanied Paulinus in North Wales during the AD60 campaign and supposedly received the appellation after their famous defeat of Boudicca and were stationed in the city for much of the Roman period.

Still to be seen in the city are icons of this period, some of the most famous Roman remains in Britain. The largest amphitheatre in Britannia, the only existing continuous circuit of Roman wall, a street plan that follows the Roman fort, a unique in-situ shrine to the goddess Minerva. Many other in-situ artefacts can be found in shops through the centre of the town. For the history loving tourist they would be advised to find their way to the Grosvenor Museum, which whilst housing a nationally important collection of the aforementioned Chester silver, also houses a large amount of the Roman finds from the city. Here, in the ‘Newstead’ gallery, at the end of the displays in a large well lit case with copious explanatory notes and diagrams can be found the skeleton of a male, the so-called ‘boy in the well’ and the focus of consideration for this article.

The significant Imperial role that Chester played during the Roman period  helps us to understand the context of the finding of this person. During the 1976 excavations in the Castle street area of the city, about half way between the South gate of the city and the river, the remains of buildings were discovered, remains that were subsequently identified as a ‘mansio’. These were highly important buildings within the structure of the empire, and could be considered to be something of a governmental ‘travelodge’ or ‘motel’. Placed approximately 15miles apart along the roads, these were for essentially hotels provided for the service of officials of the empire, and as such would have been well equipped for important customers. At a large fortress such as Chester, it is safe to assume that many very important officials would have utilised its services and as such the facilities of the mansio would have been of a suitably high standard.  This would have included sleeping facilities, dining areas, baths, and stables. Undoubtedly this establishment, as did so much of the Roman Imperial machines, would have relied on the labour of slaves to ensure it’s smooth operation.

The Deva (Chester) mansio was in use from the late 1st century to the 4th century, which corresponds to the legionary occupation of the city from it’s beginning in 79AD through to the leaving of the city in approx 380AD. The mansio can be identified to have had a number of clearly defined stages to it’s existence. The initial build, as was common in the period, was of timber which would be replaced by stone. However in this case the second stage was something of a ‘false start’ and it was not until the end of the second century that the building was replaced in stone. However, in the later part of the third century the building was gutted by fire.

During the period of use there were two wells present on the site. Well one remained in use until the demolishing of the mansio in the fourth century, whereas well two had been filled with debris after the fire third century fire.

Ominously, at the bottom of well two below the third century debris, the skeleton of a young man was discovered. 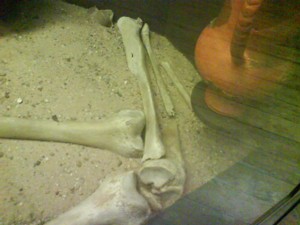 He was aged between eighteen and twenty three, was of average height and is essentially unremarkable apart from having a broken leg, which had been very badly set some time before he died. The effect of this very poor piece of bone-setting was that the individual would have most likely been in constant pain, and walked with a severe limp.

As those who have an interest in the ancient dead, the ‘boy in the well’ raises a number of questions that must be considered if we are indeed to be ‘honouring. them. I can offer no conclusions to these questions, indeed they are nowhere near comprehensive, they are merely a place which we could begin when considering our interests in the display of such remains.

How did he die?

The skeleton was found within the apparent context of the fire, suggesting a strong possibility he died in the fire. As there is no charring evident, perhaps he died from smoke inhalation damaging only the soft tissues which are now long gone. Unless skeletons such as this show bone damage through trauma  or signs of disease, we cannot know.

Why was he in the well?

Indeed this is a problematic issue. Is it possible he fell into the well in the chaos of the inferno? Perhaps he tried to hide from the heat in the well because his escape was blocked, and the rubble fell on him? This is unlikely as there seems to be no crushing injuries to the skeleton that one would associate with such an event. On a much more ominous level, is it possible his body was placed in the well post mortem? But why would this happen? Is he the victim of murder and the filled in well served as a useful place to hide the evidence? Or is it that he was of such little value he did not warrant a distinct service and the filling in of the well after the fire was used as a convenient method of disposal?

What was his status?

Of course, if he was of little value this may suggest he was a low-grade slave. Undoubtedly slaves would have been used at an official Imperial establishment such as the mansio. Was the poorly treated leg evidence of the lack of worth of the boy? But slaves were valuable property, Roman society depended on them to function. In the mansio, no doubt with access to the best doctors for it’s Imperial visitors, would it not have been prudent to treat it’s investments as efficiently as possible. Or perhaps the break was from a time before he had access to skilled physicians, suggesting he arrived at the mansio from somewhere else in Britain or the Empire. In light of more advanced investigation, we shall never know his origins.

What was his religion?

There is something of a misconception amongst the average person that Christianity arrived in Britain with St. Augustine’s conversion of the Anglo-Saxons in the early years of the seventh century. But All through the third century, the time of the boy’s death, Christianity had been severely persecuted throughout the Roman Empire and in Britain. Is it possible that in this Imperial establishment, a boy who was found to be Christian was killed, perhaps strangled and dumped in the well out of contempt? We shall never know. 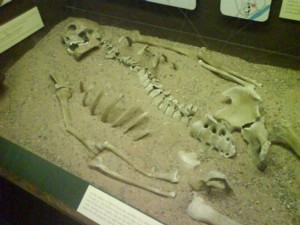 For those of us who take an interest in the remains of such individuals we cannot assume that simply because they come from a particular time period they are pagan. If we assume, we can make mistakes that do as great a dishonour to his memory as some perceive the display of such remains to be. As a re-constructionsit, a deep  understanding of our history and ancestors is essential to my modern spiritual practice, and through scientific examination such individuals can reveal a wealth of information previously lost to us. As ‘experimental archaeology’, otherwise known as living history and re-enactment can provide great insight for the academic archaeologist, so can spiritual practice be enlightened also. Whilst the long barrows of the United Kingdom were depositories of the bones of the honoured dead, does such display of bones essentially resurrect a tradition originating in the 4th millennium BC? 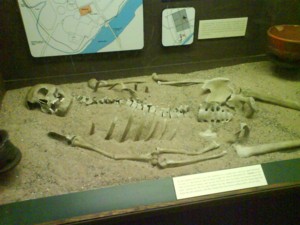 The greatest question that we can ask about the display of human remains is ‘Is there a reason for it?’. In many cases, the answer is a firm ‘no’. But as an example, here in the case of the boy in the well it is possible to look further, to consider that by displaying this nameless, historyless individual in a relatively neutral and understated manner he essentially becomes honoured in death as he was not apparently honoured in life. At root, this is a moral judgement. We must remember that these ‘human artifacts’ who reside in display cases and storage rooms of museums around Britain were, still are, people. That had families, mothers, fathers, brothers, sisters, sons, daughters, hopes, dreams, ambitions, worries and all the emotional baggage we ourselves carry day to day. They were us, they are people and they deserve respect as such and not to be treated as mere laboratory subjects.

Is there a compromise, a place where science and spirituality can meet? I believe so, for in this place we can both learn.